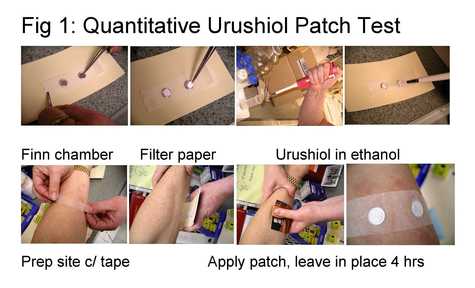 Patients presenting to us for management of poison ivy of similar clinical severity have varied in sensitivity to the chemical in poison ivy that causes the reaction across a 600-fold range. Patients who are less sensitive on patch testing to the chemical are also less sensitive to the vaccine and require higher doses to respond. Our original protocols only induced tolerance in highly sensitive patients but with new vaccine formulations and higher treatment doses we have induced durable tolerance with no significant side effects in almost all patients.

Our 2014 vaccine was safe for all patients and effective for almost all. We plan a formulation change for the 2015 poison ivy harvest that we expect to be equally safe but give stronger and longer-lasting protection and to successfully treat an even larger % of patients. Ours is the world's first allergy vaccine for poison ivy to predictably induce tolerance that can be measured by a simple skin test and that matches protection from natural exposure.

Dr. Coifman: The goal in treating allergy to something that is difficult to avoid is to induce immunological tolerance. This is a state in which person's immune system tolerates that something the same way it normally tolerates his own tissues.

Prof. Catherine Yang of the Department of Chemistry and Biochemistry at Rowan Univrsity and I have developed the world's first predictably effective allergy vaccine for poison ivy. It differs from previous poison ivy vaccines by being dissolved in alcohol instead of vegetable oils, and injected into muscle rather than under the skin. We believe it works because as the small volumes of injected alcohol are rapidly diluted by tissue fluids the vaccine comes out of solution as large numbers of tiny particles, many of which are the right size to be efficiently taken up by antigen-processing cells. In muscle most antigen-processing cells are of families that promote the development of immunological tolerance. We believe our vaccine works where other poison ivy vaccines have failed because it is much more efficient at delivering the allergen to the cells that initiate the process of tolerance induction.

Our first generation vaccines induced tolerance in highly allergic patients but not in patients who were less sensitive before treatment. The dose of those relatively dilute vaccines was limited by the amount of alcohol we coluld safely inject tnto muscle. Our newer vaccines are more concentrated, letting us give higher doses of active allergen in the same volume of alcohol. We've learned that people who are less sensitive to poison ivy by skin test are also less sensitive to the vaccine and need higher doses to induce tolerance.

At this time the vaccine is only available in our offices. We believe we are close to developing a formulation that is stable enough to be suitable for commercial manufacture, which would make it available everywhere.